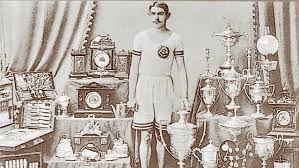 ONE HUNDRED years ago, a wiry little runner called Alfred Shrubb travelled to Glasgow and recorded one of the most remarkable feats in athletics. Performing at Ibrox Park on Guy Fawkes’ day in 1904 and aiming to set a world record for 10 miles, the finest distance runner of his generation smashed seven world bests, cheered on by a delirious crowd.

Earlier that year, Shrubb had run brilliantly at a West of Scotland Harriers event, creating such interest that enthusiasts could hardly wait to have him back. He accepted their invitation, and arrived from Sussex a week in advance to prepare for his big race. He was guest at the home of Harriers official Jack Brown in Darnley Street, Pollokshields.

A bag of nerves on Saturday November 5, he went for an early-morning walk under leaden skies. Conditions seemed far from ideal for records, but Shrubb, who was 24, knew that the Ibrox track was firm and true, and he was not disheartened.

Admission to the stadium cost sixpence (two-and-a-half modern pence) and programmes tuppence. A big crowd filed in after lunch and watched as Shrubb went to the start-line to join 12 of Scotland’s finest runners for the 10-mile event. A modest, undemonstrative fellow, Shrubb was visibly moved as the crowd ignored the joyless Glasgow weather and offered him a spine-tingling welcome. “The cheers almost lifted me off my feet, and my hair seemed to go upright with excitement,” he recalled.

Shrubb’s previous best for 10 miles was 51 minutes 30.4 seconds, which he needed to improve by 25 seconds to crack the amateur and professional records. A hush descended, and starter George Cameron raised a recalcitrant pistol three times before firing. Shrubb surged ahead, completing the first 440-yard lap in 64.8 seconds, and, employing his usual economical style, he settled into a rhythm of 75 or 76-second laps.

After two miles he was well ahead and inside record pace, and the crowd roared him on. He reached four in 19:50.6, a suicidal pace not previously sustained over ten miles. But he was showing no signs of difficulty and looked composed, his black hair and moustache glistening in the damp air.

Observers wondered if he had gone off too quickly, but Shrubb had no such doubts. The skirl of the bagpipes provided a stirring backdrop, and his skin tingled with excitement. Indeed, was that the hint of a smile beneath the neatly-clipped moustache? His adrenaline was pumping, and it was a level of performance that he would not repeat.

After a fast 22nd lap, the 12-year world record for six miles was swept away, Shrubb clocking 29:59.4 at this point. The crowd broke into renewed cheering when this was chalked on a blackboard. Even if Shrubb blew up, they had seen athletics history. But he passed seven miles 34.2 seconds inside that record.

His eighth mile was his slowest so far, but still good enough for another world best of 40:16.0, and inside the last two gruelling miles the runner was actually enjoying himself.

“The help from those gallant pipers was greater than anybody can understand. It put gladness in my heart and mettle into my heels. Never has music had greater charm for me.”

“On nearing home, that glorious sensation came over me of new life returning to wind and limb. When the bell rang for the last lap, my friend Brown and the spectators were half demented in their joy.”

To a huge roar, he breasted the tape in 50:40.6, obliterating the record, and after a brief hesitation he picked up the pace and carried on for the one-hour mark. He had covered 11 miles and 1,137 yards when the echo of the starting pistol denoted 60 minutes… an achievement that would remain unbeaten by a Briton for 49 years.

In one stunning hour of running, Shrubb had broken world records for six, seven, eight, nine, 10, 11 miles and one hour, plus all the Scottish all-comers’ records from five upwards. His ten-mile mark stood until the ‘Flying Finn’, Paavo Nurmi, came along 24 years later.

Shrubb was hoisted aloft by jubilant spectators, and a rendering of Will ye no come back again struck up.

“They carried me off the ground amidst such a storm of cheering as I never heard before or since, anywhere,” he said. “The ground was packed with enthusiastic Scotsmen, and this race will stand in my memory as the greatest in my running career.”

A year later, Shrubb was banned for life for accepting expenses, and he headed to North America to run professionally. He earned a fortune in bizarre races, often competing against horses or native Americans.

His remarkable life ended in 1964 in his adopted home-town of Bowmanville, Canada. In his time he had won more than 1,000 races – but he always regarded the Glasgow experience as best of the lot.