Brit Who Beat The Clock 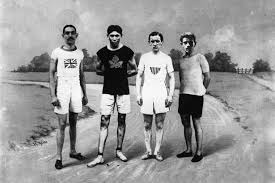 Brit Who Beat The Clock

Fact and fiction often become blurred in sporting tales of yesteryear, but today is the ideal opportunity to pay due homage, exactly 100 years after the event, to one of the greatest individual runs from a British athlete. Chances are you have never heard of Alf Shrubb, but it is never too late to recognise sporting genius.

For decades Alf Shrubb was something of a mythical figure, often confused in the sporting public’s minds with Alf Tupper from The Victor comic, the ‘Tough of the Track’ who used to lunch on fish and chips and defeat all-comers with his devastating late kick. Invariably, some misadventure would befall him as he hitched back home to Greystone, where he worked as a trainee welder.

There was a comic-like quality to Shrubb’s life as well. An apprentice brickie, his running prowess first came to the fore when he raced three miles across the Sussex fields to summon help as a cottage in Southwater burned down. Later in his career, he staged a series of races against a mysterious Red Indian called Tom Longboat, and earned a living by entering, and winning, numerous man v horse contests in North America.

But Shrubb actually existed, even if the Amateur Athletic Association tried to airbrush him out of history when he was found guilty of professionalism in 1906 for accepting payment of a boat ticket to Canada to run.

Less than 9st dripping wet, he was dubbed the `Little Wonder’ early in his career and used to train two or three times a day, a revolutionary regime in those times. He was also convinced of the qualities of King & Barnes old ale, which he used to sup most nights, in moderation of course.

Guy Fawkes’ Night 1904 was when he exploded into action and lit up Ibrox Park in Glasgow, home of Rangers, with the run of his life.

Accompanied throughout, at his request, by a massed band of pipers who played stirring music in the centre of the arena, Shrubb broke world records, amateur and professional, at every distance from five to 10 miles in one single run and, after accepting the crowds’ congratulations, he went on to establish a world one hour record of 11 miles 1,137 yards.

It was 49 years before a British runner, Gordon Pirie, broke another world distance record of any description and in the same year, 1953, that Scotsman Ian Binnie finally improved Shrubb’s hour record by 200 yards.

His 10-mile world record, the most prestigious distance at the time, of 50min 40.6sec lasted 24 years until finally beaten by the Flying Finn Paavo Nurmi in 1928 and remained a British record until 1936 when improved by William Eaton. In the same year, Eaton finally broke through Shrubb’s six-mile mark of 29min 59.4sec

Glasgow did Shrubb few favours that day. It was cold, wet and windy and the cinder track, though considered to be among the best of its era, was desperately slow and clawing by today’s standards. The only plus to set against the many disadvantages was the slightly banked track, as was the norm 100 years ago. Shrubb, though, was a man on a mission and was not to be denied.

Shrubb was disappointed after a similar mass record attempt at Stamford Bridge had failed badly in September. He had gone against his natural free-running inclinations – like today’s East Africans he liked to surge and throw in quick laps – and tried instead to keep to a rigid schedule set by coach Walter George, who had established the existing 10-mile world record of 51min 20sec 20 years earlier. George was now a highly-opinionated sports journalist and part-time coach who still hankered after the glory and limelight.

After angrily dispensing with George’s services, Shrubb cancelled all racing plans for the next six weeks and focused on Ibrox, the last athletics meet of the year. Three times in training he broke the world record in solo time-trials, and by race day he was ready, though pale faced with the nerves that haunted him throughout his career.

“Shrubb’s times are still impressive by today’s standards, but are nothing short of sensational given that they were set 100 years ago on a dodgy track virtually in the middle of winter,” Brendan Foster says.

“He was definitely an Alf Tupper character – Tupper was my hero as a schoolboy. Shrubb was a pioneer and had to be a bit of a showman to earn recognition, but there can be no doubting his extraordinary talent. He deserves a place of honour in the roll call of British athletics.”