In the Footsteps of a Legend 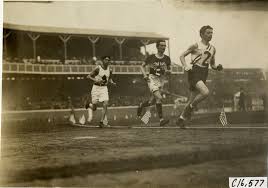 In the Footsteps of a Legend

Here we reproduce an article from Running Room Magazine (July/August 2003 issue), which followed the very first staging of the Alfie Shrubb 8k Museum 8k road race at Bowmanville, Ontario. It was written by Shrubb’s biographer Rob Hadgraft, who took part in the race himself.

THE legendary Alfred Shrubb began lapping the celestial running track many years ago, but if he was looking down on Ontario this summer, he would have been an immensely proud man. The occasion was a new annual 8k event in his name, launched and supported by the Running Room. It was a huge success and was attended by three generations of Shrubb’s direct descendants.

As a fellow Englishman, currently writing Shrubb’s biography, I was honoured to be running in the great man’s footsteps along the sun-drenched streets of his adopted hometown of Bowmanville. Shrubb’s sprightly 89-year-old daughter Norah was there as guest of honor and official starter; his granddaughter Julia Cattran wielded a VCR and helped hand out prizes; and his great-grandson Scott completed the course in respectable time.

The Alfie Shrubb 8k Museum Fun Run took place exactly 100 years after this unique athlete smashed the world two mile record, running 9.11 on a grass track in Ilford, England. It was just one of a series of startling performances between 1900 and 1914 that cemented Shrubb’s place among the all-time greats.

Shrubb’s career in his native England was sensationally ended by suspension following a row over unauthorized expenses.  He soon headed across the Atlantic Ocean, based himself in Toronto and began a love affair with this area that would subsequently see him settle there for the rest of his life.

Shrubb was athletics’ first truly international star. Sports historians acknowledge his role in ushering in the very first “running boom” in North America. Long before transatlantic shuttle flights were commonplace, Shrubb would sally forth regularly from his home in rural England to thrill audiences in the U.S., Canada, Australia and New Zealand with sensational front-running displays on track, road and country. When his wife Ada became ill and needed a change in climate, the Shrubb family headed for Toronto and settled there on a permanent basis. Shrubb died in Bowmanville in 1964 having spent his latter years living with daughter Norah Allin.

The same Norah Allin was a proud and excited lady when 280 runners registered for this summer’s (2003) inaugural Alfie Shrubb 8k Museum Fun Run. The fact that I was researching and writing her father’s biography at exactly the same time was a happy coincidence. It gave me an excuse to make my first ever visit to Canada, partly for vacation and partly for work on the Shrubb book.

The race itself was blessed with superb sunny conditions and the fast 8k course was covered in 25:03 by Buffalo Marathon winner Shingira Badzai from Zimbabwe. He was three seconds faster than Charles Bedley of the Longboat Roadrunners, and the first women runner home was Aldella Flista from Hamilton, Ontario in 29:22. As the only other foreigner in town, I finished 10 minutes behind Shingira- but then I did have the old jet-lag excuse up my sleeve!

Shrubb senior last ran on these streets in 1958, when – at the age of 78 – he took part in the Bowmanville centennial celebrations. He ran 150 yards as part of a relay team carrying a message of goodwill from nearby Oshawa. That run brought the curtain down on a unique and fascinating lifetime of running.  He raced on around 2,000 occasions, many times in front of huge crowds at places like Hanlan’s Point, Madison Square Gardens and London Olympia.

Some of his races were bizarre occasions by today’s standards. In 1907 he raced a horse called Patsy in Winnipeg; a 4,000-person crowd roared him towards the finish only for Patsy to suddenly bolt past in the last 15 yards! That same year he beat Olympic champion Billy Sherring in Buffalo by such a large margin that he had time to wander into the locker room, get his camera and return to take pictures of his opponent!

I hope my book on Shrubb will be of major interest to Canadian readers, for it will feature detailed accounts of his incredible head-to-head tussles with Tom Longboat as well as other adventures while he was based in Toronto and later Bowmanville.

It was good to see members of the Longboat Roadrunners taking part in the 8k race. Race director Al Storie has announced the setting up of a new club called Shrubb Striders, so perhaps the friendly rivalry between Shrubb and Longboat of 100 years ago can be revived in 2003.

Shrubb’s remarkable life story first caught my imagination as I sipped a cold beer at a runners training camp in the Canary Islands six months ago. Research and writing is now underway, and I’m hoping my full-length illustrated biography of him will be on the bookshelves soon. I hope I can do justice to his achievements and adventures.

IN his day he was the talk of the land. In fact Alf Shrubb was so famous that in 1912 his name actually entered the English language.

Shrubb was mentioned in two works of fiction that would later be regarded as literary classics. The two authors concerned seemed to be acknowledging that the name ‘Shrubb’ had by now entered the language as a by-word for speed.

Arthur Conan Doyle’s The Lost World – originally serialised in the magazine The Strand in October 1912 – would later become a novel and then a film. Doyle was, of course, also the creator of Sherlock Holmes, and a big sports fan himself. In The Lost World he wrote of a scientific expedition, headed by the larger-than-life Professor Challenger, which sets out to explore a plateau in South America that remained frozen in time from the days when dinosaurs roamed the earth. In Chapter 13, he writes:

‘These brutes [dinosaurs] could not run as fast as a man in the open. They have short, bandy legs, you see, and heavy bodies. Even Challenger could give a few yards in a hundred to the best of them, and you or I would be a perfect Shrubb.’

Taking a leaf from Foyle’s book, P.G.Wodehouse also used Shrubb’s name in his novel ‘Death at the Excelsior’, published in 1914. He wrote:

‘Not to invite so old a friend to stay at his home, if he ever happened to be down that way, would, he hinted, be grossly churlish. Mr. Rastall-Retford, impressed, issued the invitation. And now Peter was being punished for his deceit. Nemesis may not be an Alfred Shrubb, but give her time and she gets there.’

Even today, few sportsmen or women, however famous, can claim their name actually entered the English language!