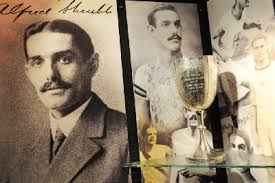 Shrubb blazed the trail for British cross country
By David Powell, Athletics Correspondent
THE British trials for the World Cross Country Championships take place in Nottingham tomorrow in the certain knowledge there will never be another Alfred Shrubb. This winter marks the hundredth anniversary of the first International Championship, the forerunner of the World Championships, and the Great Britain’s men’s squad, in keeping with the past ten years, will not be among the medals in Lausanne next month.

Ian Stewart was the last British winner of the senior men’s title in 1975. Shrubb was the first, from any nation, in 1903, long before the Africans came along. Yet though he was the world’s greatest distance runner at the turn of the last century, Shrubb was fortunate in one sense to win the first International Championship at Hamilton Park Racecourse, Glasgow, in 1903.

Shrubb, whose athletic talents had been identified five years earlier when he beat a fire wagon to a fire, was due to race in Paris on the weekend of the first championship but England requested a postponement because their top man would be missing. The other competing nations, Scotland, Wales and Ireland, agreed and the race was held one week later.

As well as retaining the title in 1904, Shrubb broke every world record from 2,000 yards to one hour. Outstanding were his seven world records in one run, from six miles to the hour, at Ibrox Park on Guy Fawkes day. He clocked 31min 02.4sec for 10,000 metres on his way to 11 miles 1,137 yards for one hour.

Shrubb’s hour record lasted for nine years, his ten-mile time of 50min 40.6sec for 24 years, and his two-mile record, of 9:09.6, set in the summer of 1904, 22 years. Several of his marks lasted until Paavo Nurmi, one of the Flying Finns, improved them in the 1920s. For four years in succession from 1901, Shrubb won the national cross country and AAA four and ten-mile titles.

In 1972, Ron Clarke, the Australian who set world records in the 1960s, was asked to name the distance runners he rated most and put Shrubb fourth in a list headed by Emil Zatopek, the Czech who won the 5,000 metres, 10,000 metres and marathon at the 1952 Olympics.

In Shrubb’s time, the bane of the sport’s authorities was professionalism, and in 1906 he was suspended by the Amateur Athletic Association for receiving inflated expenses. So Shrubb embarked upon a professional career, his last race coming in 1919 when he lost to a horse at Horsham cricket ground. In 1920, he became Oxford University’s first professional coach.

Eight years later, with his wife confined to a wheelchair by rheumatoid arthritis, the Shrubbs were advised to move to a warmer climate and settled in Canada. Born in Slinfold, Sussex, in 1879, Shrubb never competed in an Olympics Games because Great Britain did not send a team in 1904 during his amateur heyday.

Shrubb returned to England in 1952 when the AAA reinstated him as an amateur — aged 72. He died in 1964, at 84. His potential had been noted in 1898 when a fire broke out and Shrubb, with a member of the local Horsham club, ran to help the wagon to put it out. He beat the wagon.

After taking the Sussex and Southern cross-country titles in 1900, Shrubb joined South London Harriers but continued to live in Horsham, where he ran a tobacconists’ shop. There were extraordinary scenes at Horsham railway station each time he returned. The town band, and torchcarrying supporters, would wait to greet him. He was, like Paula Radcliffe is now, a celebrity of his day.